Don't mess with the Golf Pros!

Last month a few of us from the Golf maintenance department decided to challenge your Sun City Head Golf Professionals to a round of golf. As you can see from the photo it did not work out in our favor. Turns out the Pros are pros for a reason and the wager was the losers had to wear Pink Sparkle hats to our monthly CA safety meeting. Let me tell you, we were a big hit! 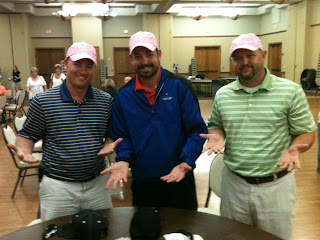 Posted by Sun City Golf Course Maintenance at 11:13 AM

Since the grow-in at Cowan Creek, some of the greens have out-performed others under the stress they receive, and are generally easier to maintain. #6 green was a prime example of one of the greens that rarely had any problems in years past. However, when we came out of dormancy, it was a surprise to see that it was in the worst condition in relation to the other greens. We found out that in addition to the current problems we are facing on all our greens, #6 green wasn’t draining properly. There are two drainage outlets that leave this green, one in the low area on the left side of the green, the other in the front of the green. Both metal drainage basins are located in the green surround on the left side of the hole. Using a plumbing snake, a hose, and a wire locator, we found that there was a problem with the drainage pipe somewhere in between the exit of the green and the drainage basin. We dug it up, and here’s what we found:
The first problem we found was that the pipe had been crushed during or after installation. This is what we originally thought was the problem, so we dug this area up so we could replace the crushed pipe with new pipe.


After digging it up, we discovered 4 feet of crushed pipe which was completely filled with mud and rocks, and the upper end of the pipe was cut and exposed, not connected to anything.

With only one properly working drainage outlet, this issue could play a large role in having anaerobic conditions on this and other greens. We have fixed the drainage problem in this area, and we will continuously check other problem areas to see if cutting drainage pipe was a popular practice during course construction. 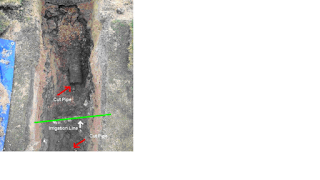 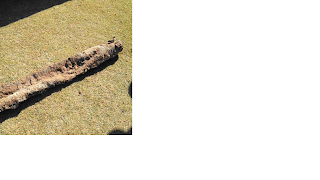 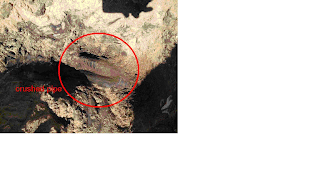 Posted by Sun City Golf Course Maintenance at 8:33 AM