We’ve recently discovered and implemented a new method of re-establishing weak areas throughout the courses at .  The 2011 drought, along with excessive cart traffic, resulted in numerous areas where we lost small patches of turf.  These areas were primarily in the rough and along cart paths, and beginning in late spring we began topdressing them with Dillo Dirt, as opposed to straight sand. 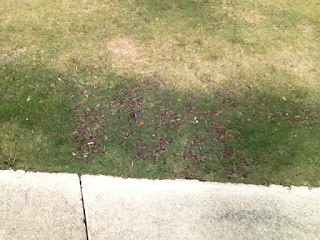 Dillo Dirt is a compost made and trademarked by the City of and Wastewater Utility.  This type of compost is different from normal compost in that it contains treated municipal sewage sludge in addition to yard trimmings collected curbside by the waste management department.  There are several processes involved by City of to decontaminate the compost to make it available for landscape and turf use.  The particle size of Dillo Dirt is larger than sand/soil, but smaller than regular mulch. 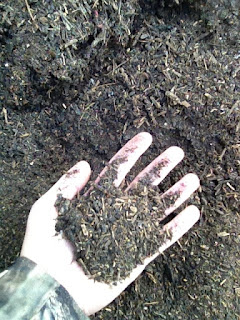 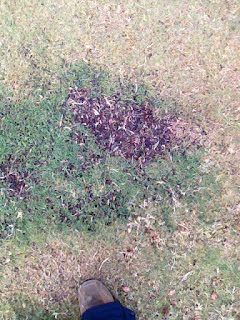 The largest benefit of using Dillo Dirt over regular topdressing sand is its ability to retain moisture.  Sand would in most cases be preferred as an ideal growing medium for turf grass due to its higher water infiltration rates, but we found that a thin layer of Dillo Dirt or even a mix between Dillo Dirt and topdressing sand has proven to be more successful for recovering weak areas of turf.   During the heat of the summer, Dillo Dirt needs little more than routine irrigation to keep it wet, whereas topdressing these areas with sand would require constant daily attention in order to recover these areas.  We also believe that trace amounts of nutrients stored in the material have helped expedite the recovery process.  As you can see, the new growth (which is greener) is filling in these worn areas, and we have saved many hours of labor by using this method.

As the grass becomes dormant, we will back off on our Dillo Dirt applications, but we will continue this process in the upcoming spring to help reduce future worn areas. 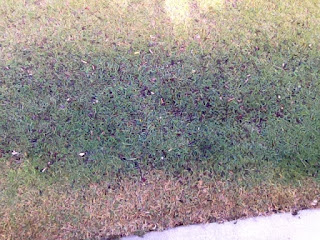