We would first like to start off by wishing former Cowan Creek Superintendent Craig Loving a fond farewell. He has accepted the Head Superintendent position at Lost Creek Country Club in Austin which is a great opportunity for him to advance his career. He will be greatly missed at Sun City and we wish him the best on his new endeavor!

So, with Jonathan Ayers leaving White Wing a few weeks ago, and now Craig Loving leaving Cowan Creek there a lot of changes in the Golf Maintenance management scenery here at Sun City.

This should be a fairly seamless transition since all but one of the positions are internal moves within our company. We are excited to have a new set of eyes on each of the properties and it should provide us with a new level of course conditions and attention to detail.

We would also like to take this time to thank Blake Mathis (Assist. Supt at White Wing) for taking charge of White Wing Golf Maint. as the Interim Supt. for the last few weeks and keeping the course in excellent shape while we go through these management changes.
Posted by Sun City Golf Course Maintenance at 8:21 AM

Over the next couple of weeks we will be performing some aggressive verti-cutting on our greens in an effort to remove more thatch from the greens canopy. This practice often leaves some scarring on the greens as seen in the attached photo. This does not affect ball roll and will actually help increase green speed and smoothness. The scarring or "scalped" looking areas will quickly heal and look back to normal within a week's time. 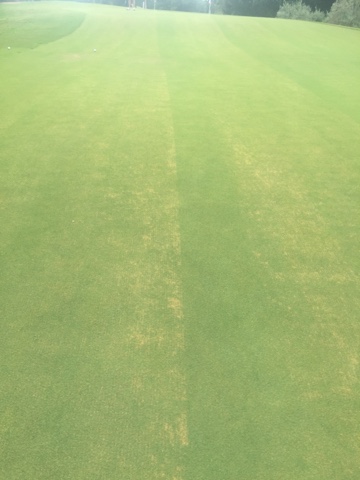 Posted by Sun City Golf Course Maintenance at 9:29 AM