The new view from the left fairway bunker on #4 at White Wing. 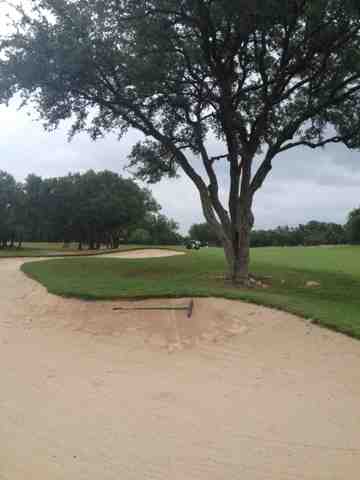 Posted by Sun City Golf Course Maintenance at 11:29 AM

May weather hasn’t been much different than April’s and we have had very few days with combined temperatures in the 150’s. What that equates to is that we still aren’t at the optimal temperatures for Bermuda grass growth. As we all know the tendency in Sun City is that our fairways suffer their most compaction during the winter months when the Bermuda is dormant and not growing. This in turn causes us to have tight lies in the fairway and not all golfers prefer that type of lie. Once we are at a consistent 150 combined temperature we will start to see the fairways grow, get a little “fluffier” and provide easier lies for those who do not care for the tight lies. Often times I hear “we are hitting off dirt” (or sometimes they say concrete) and this not the case. A compacted area of turf is still turf, do we have some spots here and there that are bare, yes, but we continue to identify them and work towards growing them back in or re-sodding them.
The first quarter projects are finished and they included the drainage project on #14 at White Wing, the trimming of the big oak on #6 at Legacy Hills and the seeding and clearing of an area on #8 at White Wing.  Due to the cost being less than expected on the tree trimming on Legacy Hills we will have enough in the budget to address some trees on White Wing that were on our playability list from 2012.
The Playability committee also met this month and completed the spring tour of White Wing. During this tour we also looked at some of the safety items that were brought up in the Safety Committee’s report from last year.

Posted by Sun City Golf Course Maintenance at 9:05 AM