In response to a few issues with #1 fairway drainage laid out by the Playability Sub-Committee our staff addressed the following:

This month has been primarily about getting the bunkers done at White Wing, which is still an ongoing project. The individual courses have also been spraying post emergent for any ryegrass or poa annua that has germinated on the greens and/or surrounds. All three courses are very clean in terms of weed pressure and we will start our spring pre-emerge applicationsnext month. Something new that we are going to be trying next month is an Organic colorant for the greens. Recently we had a company come out and use the product on the Cowan Creek putting green as a free trial. We liked the product and the results, this will make the greens a natural green color similar to what they look like in the summer. Not only does this make them look more appealing to the golfers but the darkness of the green helps attract heat and in turn heat up the soil temperatures. This product is very inexpensive compared to the other products out there today and the results are better as well.
As you can see, there is a dramatic difference in appearance. 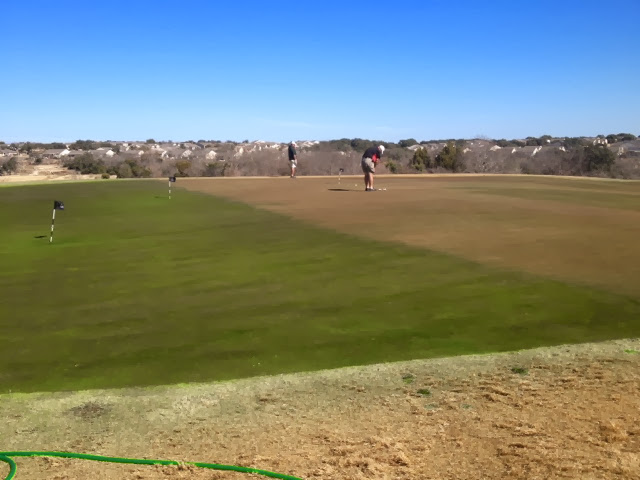 Staffing Levels
Staffing has been a problem over the past month but recently we have started getting some new employees in and staffing levels are slowly increasing back up to where they need to be.
White Wing Greenside Bunkers
The White Wing Greenside Bunkers are still being worked on and we have almost completed removing all of the old sand out of the bunkers on the front nine. Currently we have filled the greenside bunker on #1 and would like some feedback from the committee on the new sand. The sand that we have switched to is the same sand used at the TPC San Antonio course and they have been very pleased with its playability.
Initially we thought we would have moved more quickly through this process but due to a reduction in staff over the past month it has taken more time than we expected. This is the highest thing on our priority list and we will continue to work hard to have this completed before March. Since this project has been so time consuming we have decided to alter our original plan of having all of the greenside bunkers as GUR and will now only play the bunkers that are marked GUR on the front nine at White Wing as ground under repair (GUR). We will send out update when we have completed the front nine and inform everyone when we are moving to the back nine to begin work. We would like to thank you all for your patience and understanding during this major project, we look forward to its completion.
Audubon
Currently working on submitting a site map that displays our natural areas throughout each course and the surrounding areas.
GCSAA Certification
Continue to work on case studies and Supt. portfolios.
2014 Golf Industry Show
The first week of February Craig, Jonathan and I will be attending the GCSAA Golf Industry Show in Orlando, Fl.  While attending we will be taking numerous classes that we will report on at the Feb. GC meeting.

Posted by Sun City Golf Course Maintenance at 10:51 AM