Yes, the season is once again upon us where all three courses in Sun City begin aerifying the greens.  Every year we address the “why” behind the reasoning for aerifications.  There are many articles published online by credible organizations such as the USGA and GCSAA that explain the need for aerifications, as well as our blog entries from previous years that detail why we do it.  To put it simply, both plants and animals need air and water to survive.  Aerifying alleviates compaction from foot traffic and mechanical stress (mowers), and allows a channel for both air and water to reach the root zone.  But the focus of this blog entry isn’t on the “why”, but more on combating the negative perception of post-aerification playability.


The general consensus for 95% or more of golfers is that the greens don’t roll true after each aerification, and that they take too long to heal.  The putts are bumpy and bounce off the intended line, leaving a lot of missed putts.  If you ignore the physical appearance of the putting surface immediately after an aerification, you might actually realize that there are techniques that we implement to ensure a relatively smooth ball roll.  Are they as pure as they were the day prior?  Probably not, but they will be healthier in the long run, and the difference in playability isn’t as bad as perceived.  Below is a diagram of the appearance of our most recent aerification from a bird’s eye view, as well as videos of a ball roll from a stimpmeter on the days following our aerification. 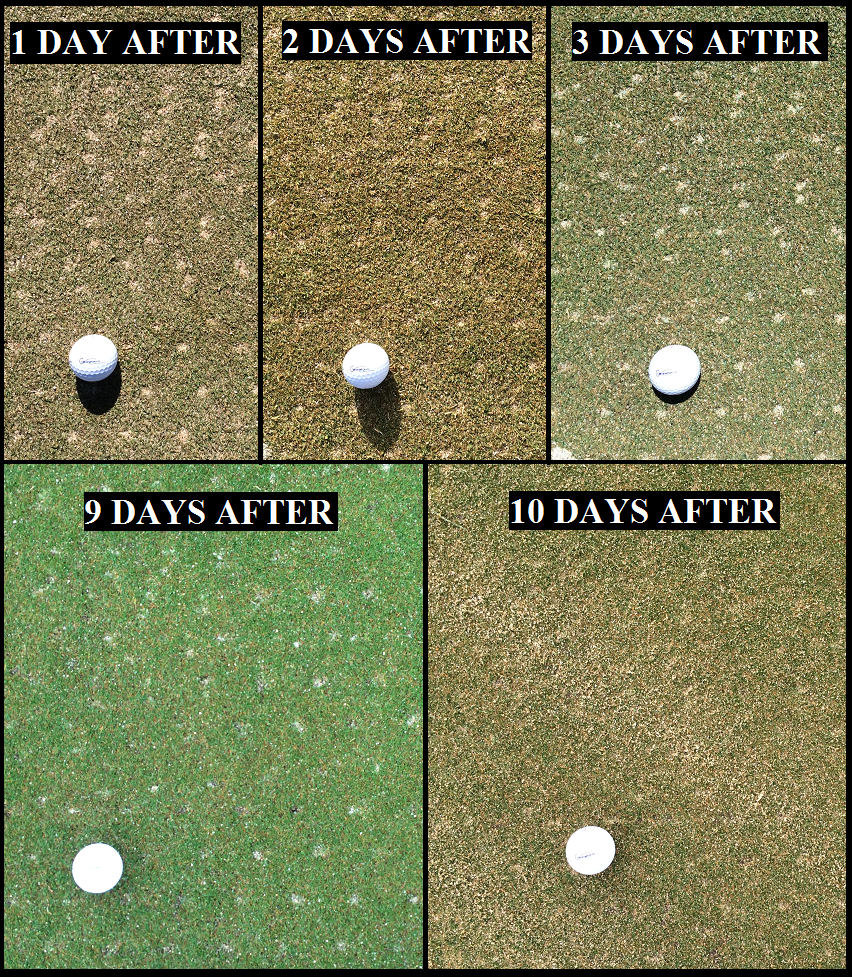 (for high definition video:  https://youtu.be/SgetbTcKVJc )
The video was taken from the same spot on the same green (#18 Cowan Creek), as were the aerial photos.  All of the ball rolls following the aerification have minimal bounces, and none of which bounced off its intended line.  In most cases, the subsequent ball that was rolled hit the previous ball, which indicates how true the green’s surface actually is.


We can achieve this consistency with the proper quantity and incorporation of topdressing sand during the aerification process, as well as rolling the greens multiple times on the days following.  The overall techniques vary from facility to facility, but the results can be the same if performed correctly.  As the sand settles over the next week, an additional application of topdressing sand is needed to re-fill the holes.  So if you can ignore the appearance of the greens for a little while (7-14 days depending on the weather), you will realize that the playability isn’t an issue.  Hopefully you won’t be so afraid to sign up for a tee time at one of the courses following our aerification days, but if you still want to blame missed putts on aerification holes, you have our permission to do so.
Posted by Sun City Golf Course Maintenance at 4:59 PM