Attacking our Problems from Top to Bottom

​Hopefully by now everyone has somewhat of an idea of why we perform many of the cultural practices needed to promote long-term healthy greens surfaces. There’s no question that these practices are temporary inconveniences to golfers. But without periodic aerifications, topdressing applications, and verticutting, the greens would fail and we would be switching to artificial turf or putting on dirt. There are multiple benefits for these “destructive” techniques (decreasing compaction, removing thatch, decreasing grain, displacing soil), but the primary goal is to promote air and water movement through the soil profile. Just like us, the greens need to breathe…

​So what happens when we perform all these tasks successfully but we still have substantial turf loss in certain areas? The spring of 2012 helped us discover literally an underlying issue in many areas of the greens at Cowan Creek. Crushed/cut drainage pipe and improperly constructed drainage systems will eventually only take you so far before your greens fail, which we saw early last year. The good news is, we are well on our way to alleviate these problems. The following paragraphs will further discuss the current issues we are facing and how we are addressing these problems from the bottom-up.

​Needless to say, we were scratching our heads last year when #6 green struggled through the spring and we had to re-sod over 1,000 square feet of the green. The green gets full sunlight throughout the day, there is plenty of airflow across the green’s surface, and all of the cultural practices were sound. We did some digging around to find that the original drainage pipe was cut during construction to allow room for irrigation pipe. This issue has since been fixed, and the failing of this green served as a catalyst for an overall drainage inspection. We went to other greens with weakened turf (#9, #7, #13, #4, #2, #5, etc) and we found these additional problems: the pea gravel layer in some drainage systems was 23” deep, the drainage outfalls were not on a sufficient slope to allow water to flow out of the pipe, and the drainage pipe daylighted into dirt and brush. All of these factors keep water and anaerobic gases locked in, which in turn attributed to poorly performing greens surfaces.

​It took several years for all of these factors to catch up with us, but over time the sub-surface conditions gradually became bad enough for substantial turf loss. No matter what we did culturally from the top, we still weren’t getting positive results. Our solution to this problem was to promote sub-surface airflow up through the soil profile by blowing air into the existing drainage pipe. 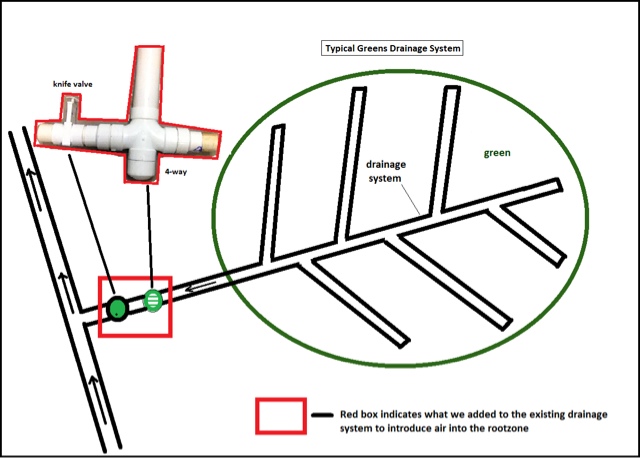 Most greens drain differently with respect to the slope of the green and surrounding areas. The above diagram is representative to what we found on #9 green. The drain leaves the green from one pipe on the left side of the green. We installed a 4-way and knife valve so we could isolate the drainage system and inject air into it using a backpack blower.

​As the air enters the pipe, the knife valve restricts airflow from leaving the drainage system so the air blows through the pipe and into the gravel layer. After the air completely fills the pore space in the gravel layer it is evenly distributed up through the rootzone. 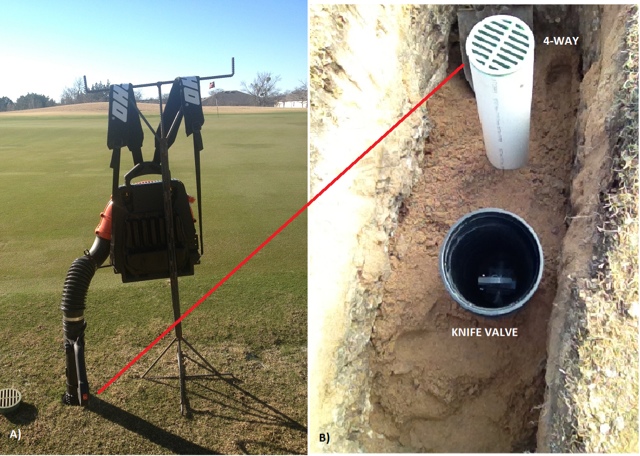 Figure A is a photo of one of our backpack blowers set up. It takes less than 2 minutes to close the knife valve, set the stand up, and put the backpack blower in place. We generally run one full tank of gas on each green 1-2 times a week, and we typically run the blowers in the morning in front of play. Figure B is a photo of what the 4-way pipe and knife valve look like in the soil.

​The ultimate goal of this practice is to create a well-aerated soil profile that promotes healthy populations of aerobic soil microbes, which serve multiple roles for plant health. On the contrary, without sufficient air and water movement through the soil, anaerobic microbes can have a detrimental effect on plant growth. In poorly drained soils, anaerobic microbes can reduce sulfur to hydrogen sulfide (H2S) which produces black layers that are toxic to the plant. We have seen such black layers in plugs taken from weak areas on the green.

​With the implementation of our makeshift sub-surface airflow practice as well as our current cultural practices, the greens should return performing to their potential. Fixing improperly installed drainage systems is an ongoing and painstaking process, but we are making significant progress weekly. We have now fixed the drainage on #6 green, and we have set up #5, #7, #9, #11, and #13 with 4-ways and knife valves for injecting air. We are optimistic that by attacking our problems from top to bottom, we should transition into the growing season with much better results than in years past.